The off-beat documentary FINDING KRAFTLAND got its most unusual start with a trip to Disney World.

Mesmerized by a promotional video of Disney World's Top Attractions endlessly looping in our hotel room, my son Nicky and I decided to create a film espousing the virtues of our own obsessive lives. 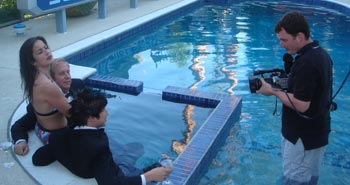 FINDING KRAFTLAND begins when my beloved brother, David, died after a lifelong illness. Shortly thereafter, both my parents also passed away. With all of my original family gone, I was truly lost. Though I had a young son, I barely knew him. Nicky spent most of his life living with my ex, an Earth-Mama living in a log cabin in Oregon raising chickens. Meanwhile, I had become a work-obsessed Hollywood cliché submerged in my career of being a successful film music agent.

Things took an unexpected twist when my own health and life issues came barreling down on me in the form of a blocked heart artery. Yikes. Clearly drastic measures had to be taken.

Maniacally, I decided to get my life together and did the logical thing anyone who had just undergone heart surgery would tackle… dragging my son, Nicky, on a worldwide trek around the globe riding 425 roller coasters in over a dozen counties researching the World's Greatest Roller Coaster.

Surviving that, we experienced more adventures together. There was zip-lining over the jungle canopies of Mexico, dog sledding in Canada, scuba diving in the Bahamas and experiencing weightlessness in the "Vomit Comet" via a Zero Gravity flight.

Impulsively, we began cramming our home with thousands of vintage toys and board games. Auctions were flooded with outrageous bids for as many pieces of Disneyland as we could possibly snare. Ultimately, we decided to recreate my childhood by transforming our home into "Kraftland", a shrine to Pop Culture Kitsch. 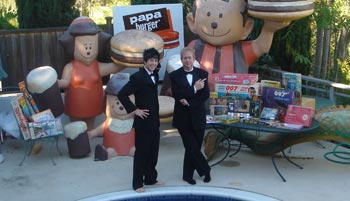 To off-set some of these excesses I also became heavily involved in fundraising, volunteer teaching and working in an orphanage in Cambodia.

Finally, for Nicky's Sweet 16th and my Sour 45th Birthday Party, I teamed up with filmmaker Adam Shell in co-writing and co-directing FINDING KRAFTLAND, the world's most overproduced home movie.

Using the Disney World promo video as our source of inspiration, we set out to produce a documentary that was somehow both incredibly self-indulgent and self-serving yet somehow universal and entertaining.

Step One was tracking down "Stacey," the hyper-energetic host of the Disney piece. This quest led to North Carolina where we located actress Stacey J. Aswad and flew her out to Los Angeles for an elaborate "Kraftland" shoot.

The final step was months of late-night editing to create this 70-minute autobiographical documentary. 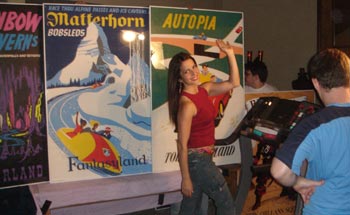 The end product was originally intended to have a one-time-only Birthday screening. This extravagant "Cast and Crew" party took place at the Paramount Pictures Studio where 750 of our closest friends viewed this incredibly shameless home movie.

The reaction defied expectations. Something about the film hit a nerve among guests of guests who didn't even know us. The love story between father and son combined with our over-the-top zest for life touched people in unexpected ways.

Several people suggested submitting "KRAFTLAND" into film festivals. On a lark, we did just that, and much to our jaw-dropping delight, we found it was selected to have its World Premiere at the 22nd Annual Santa Barbara International Film Festival.

It is our intention to make the film festival the beginning chapter of our sequel FINDING KRAFTLAND: EPISODE II.